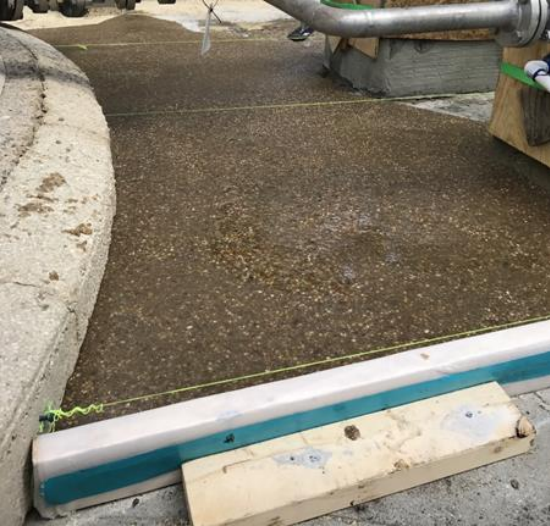 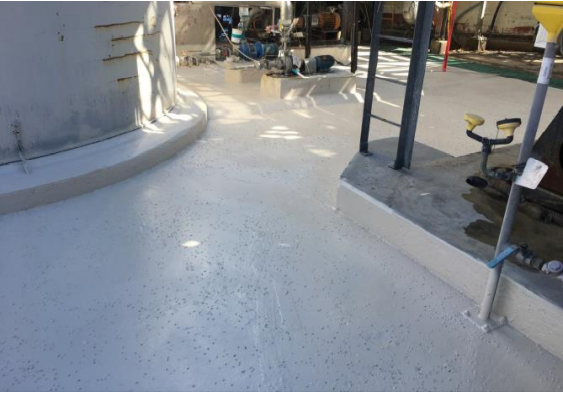 Plasmet Epoxy Polymer Concrete is a high strength, corrosion resistant, self levelling concrete substitute. For use at temperatures up to 100°C. May be used in both immersed and non immersion service including chemical immersion. Can be used to repair existing damaged concrete or for surfacing and grading at thicknesses as low as 3/8” thick.

A concrete bund area at the Tall Oil plant had deteriorated over time due to exposure to Sodium Hydroxide (NAOH), Black Liquor and occasional exposure to Sulfuric Acid (H2SO4). This led to the containment not draining correctly and the low areas of the surface allowing for standing puddles. The puddles allowed for a higher concentration of caustic, acid and black liquor—thereby creating a faster rate of concrete corrosion. If left unmitigated, the chemicals would penetrate the concrete and “wormhole” into the sub-grade soil. The tank curb had deteriorated as a result of a puddle forming against it, which might eventually result in corrosion of the tank floor from the outside-in. The client required that all work commence during normal operations so as to not impede production.

The concrete was to be restored to it’s original grade to allow for drainage to a nearby U drain, and a chemical barrier coating/lining would be applied.
After utilizing temporary dams to control the path of wash down water and/or rain water to the nearby U Drain, the team washed and neutralized the concrete and prepared the surface via scarifiers and hand tools. Next , the concrete was sealed/primed with Plasmet ECP and placed, Corrocoat Epoxy Polymer Concrete which was mixed in 1/5 Cubic Yard kits, transported with a wheel barrow and placed using finishing trowels. For chemical protection the team applied our Polyglass VE glass flake vinyl ester coating to the top and broadcast nonskid aggregate in the topcoat.