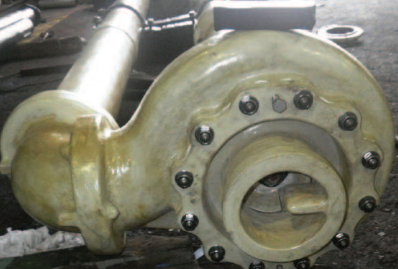 HAVE WE MET BEFORE?

Corrocoat Japan was asked to service a raw water pump that they last serviced in 2011. At that time the vertical wet-pit volute pump had been in operation since 1993 without any servicing and as a result all the internal components were found to have deteriorated. A full refurbishment was carried out and the pump returned to service.

The client, a major steel plant, had been very satisfied with the results and so seven years later, as part of a maintenance program, they called in Corrocoat to inspect and service the pump again. It operates in a very aggressive
environment – the raw water it carries can be very abrasive. Processes such as cold and hot-rolling, casting and scrap steel storage produce waste oil, grease and debris can cause considerable pump erosion and corrosion.

When examined, the pump was found to have deformed impeller blades and in general all the internal components were suffering abrasion and corrosion damage so a full refurbishment was required.

The pump was transported to Corrocoat Japan’s workshop where it was stripped and abrasive blast cleaned. The impeller was repaired with wetted out glass fibre cloth and coated with Corroglass 600 Series which was also used on the internals of the casing as required. Both impeller and casing were then coated with Polyglass VEHA which provides excellent resistance to solvents and acids at elevated temperatures and provides excellent undercutting resistance and sliding abrasion resistance.

The pump was re-assembled and returned to the plant where it is expected to give another seven years of trouble-free service.