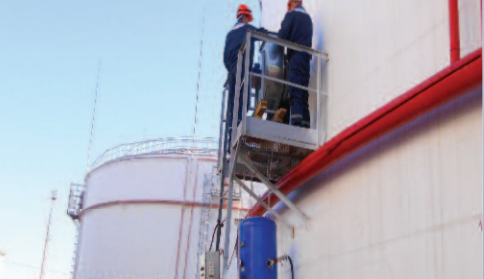 UP AGAINST THE WEATHER

One of our customers called us a few weeks ago to advise that they had a leak on the 3″ diameter nozzle used to fill their 98% Sulfuric Acid Tank atop a Neutralization Sump. The nozzle leaked acid each time their vendor filled the tank, thereby causing a safety hazard and reliability issue for the plant. As an emergency measure, the plant personally applied a product called “Pig Putty”, which failed within weeks as it wasn’t rated for this service.

After further investigation, it was found that the internal liner had failed at the weld and had corroded the steel from the inside out.

As a solution, Corrocoat specified our Plasmet AR3 liner which was applied to the surface of the steel that was prepped to an SSPC SP11 using die grinders and a bristle blaster. We then wrapped the nozzle with a 1″ wide fiberglass ribbon using our 98% sulfuric acid resistant laminating resin, followed by two additional coats of Plasmet AR3, all performed while the tank was in service in one long day.

While we certainly don’t mind the easy problems either, Corrocoat thrives solving the most difficult and interesting problems in industrial plants.